From live act to virtual launch

A good story will find its way

Storytelling has an impact, it inspires and delights on many different channels – if the idea matches the product as well as the company and is told in a compelling way. This became evident when our plan for a perfectly orchestrated trade show presentation was crashed by the corona lockdown. With a good story, lots of technology and a whole lot of dedication, the product launch was turned into a cool digital premiere.

It is hard to imagine our consumer world without packaging. But what to do with all the garbage? Large parts could be recycled to avoid it ending up in landfills or incinerators. Recycling specialist TOMRA develops highly efficient collecting and sorting machines to feed valuable materials into the recycling circle. Searching for new solutions in the separation of materials, the world market leader has taken its high-end sorting machine to another level, breaking new ground. On May 4 2020, the technical masterpiece was supposed to be presented to an international audience of professionals from the industry on the IFAT for the first time. To celebrate the launch in style, TOMRA wanted a production that would stand our from its competitors.

Drown out the background noise

Much faster, much more precise, much more efficient: In the recycling industry, it’s the hard figures that count. Communication in this environment is thus a competition for key performance indicators. The new AUTOSORT system shines in all the technical features, but it takes more than that to drown out the background noise of figures, data and facts: A good story to engage people emotionally. A good story to attract attention and identification in external communication, and to create a sense of identity and cohesion within the company.

A good story is authentically rooted in the product and the brand it’s about. So we took some time to get to know the new AUTOSORT system closely. We analysed the competition, talked to customers and partners and of course listened to what engineers and product managers had to say. This gave us a good idea: AUTOSORT is the result of an ideal collaboration of many people with good ideas and passion for the job. The machine’s special feature is its virtuously orchestrated sensor technology.

And so the idea was born – Symphony of all Sorts

Just like the musicians of an outstanding orchestra, the individual parts of the machine play perfectly together to create the highest sound and recycling quality. The collaboration of engineers and designers who built the machine was perfect, too. Just like in recycling, the composition aims for one hundred percent purity. Customers can experience the perfection and harmony in a new dimension. TOMRA employees in recycling yards and belts are part of this symphony and contribute to its success every day. 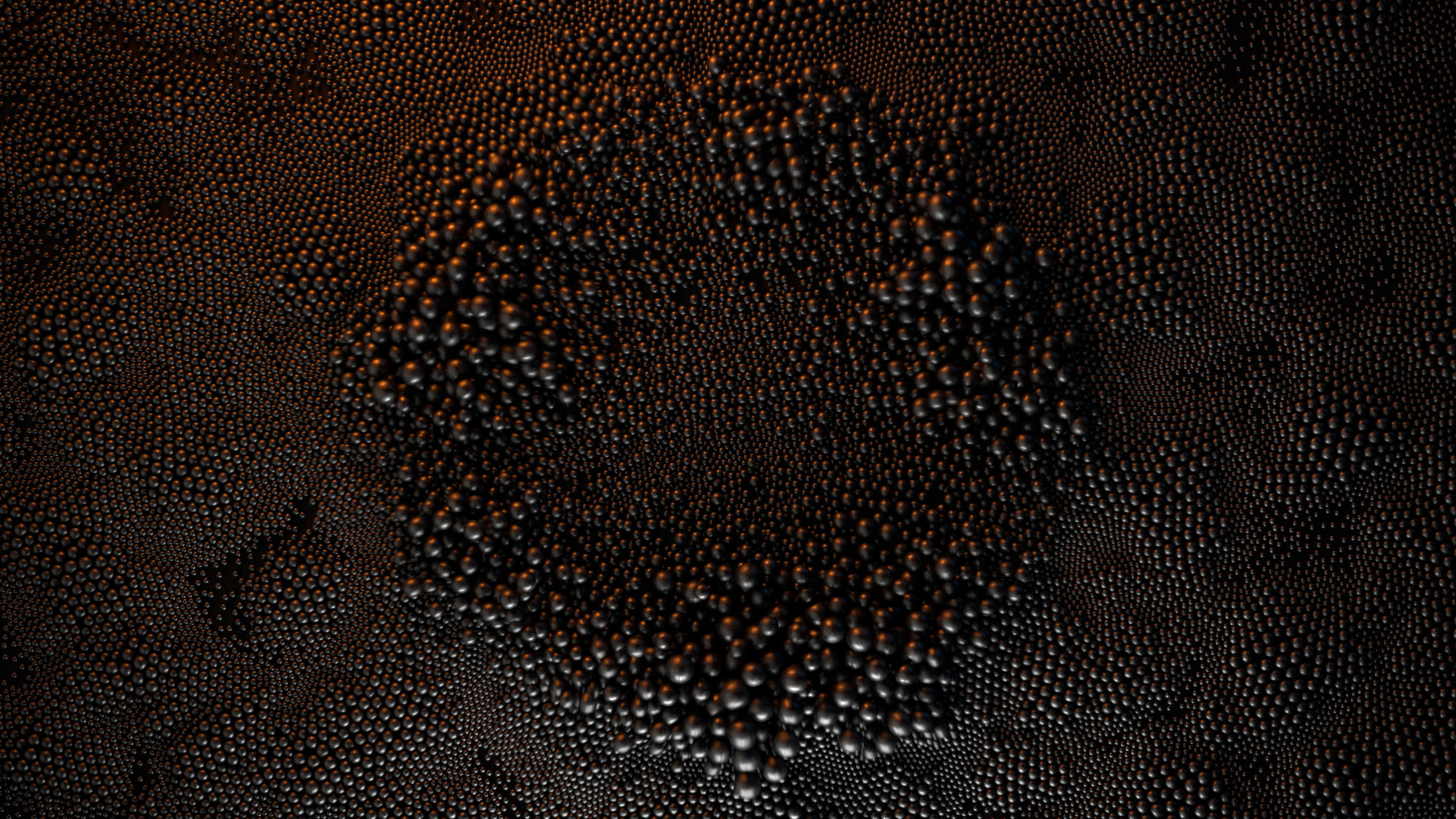 To present the technology symphony effectively, we looked for support from musicians and sound engineers. The composition team drove to the German TOMRA headquarters in Mülheim-Kärlich to record AUTOSORT’s original sounds: The conveyor belt humming, the recyclat chips rustling and other noises served as the basis for the electronic soundtrack that was afterwards arranged in the studio. In addition to the sound logo, four tracks were created that can be downloaded from Spotify. 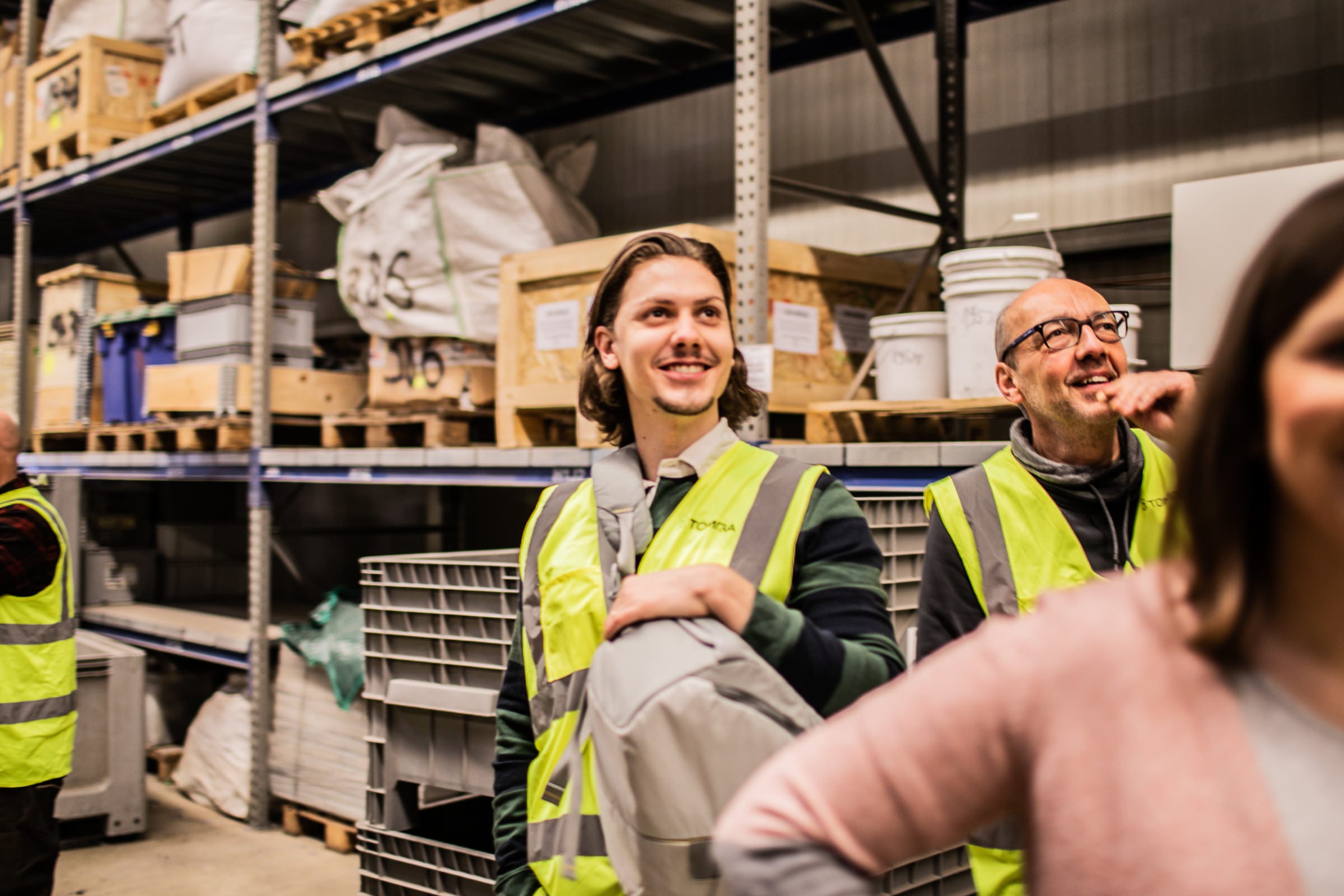 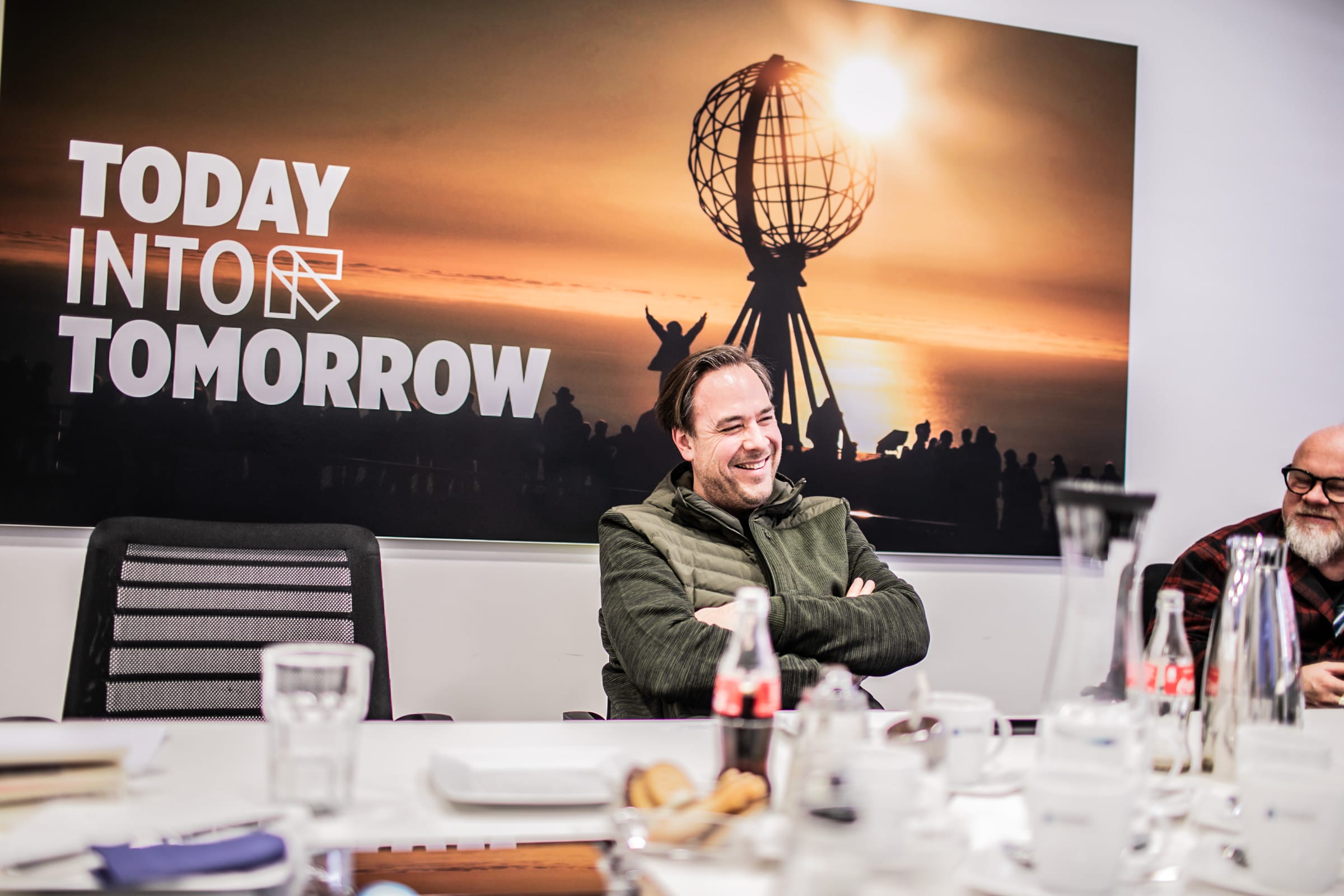 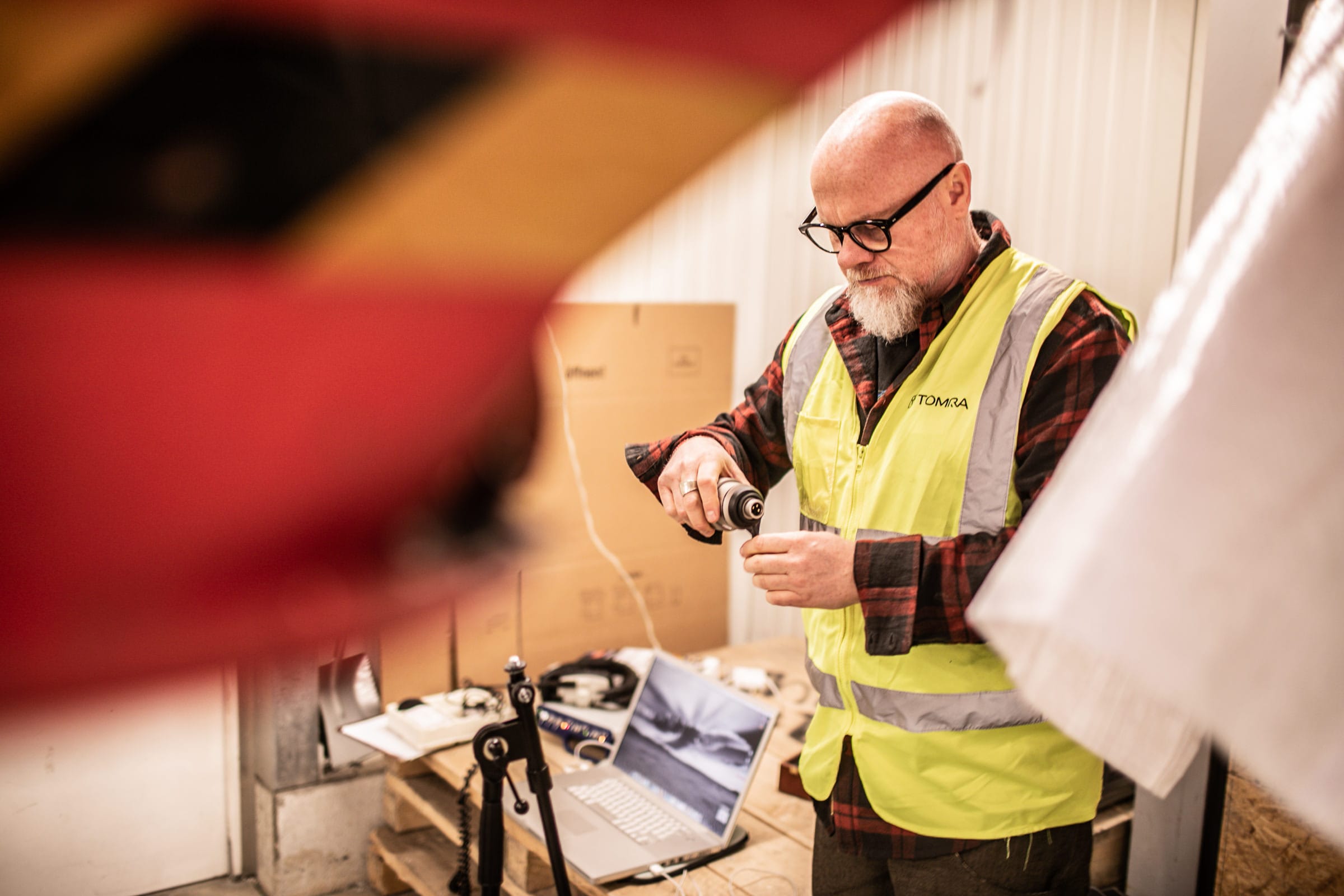 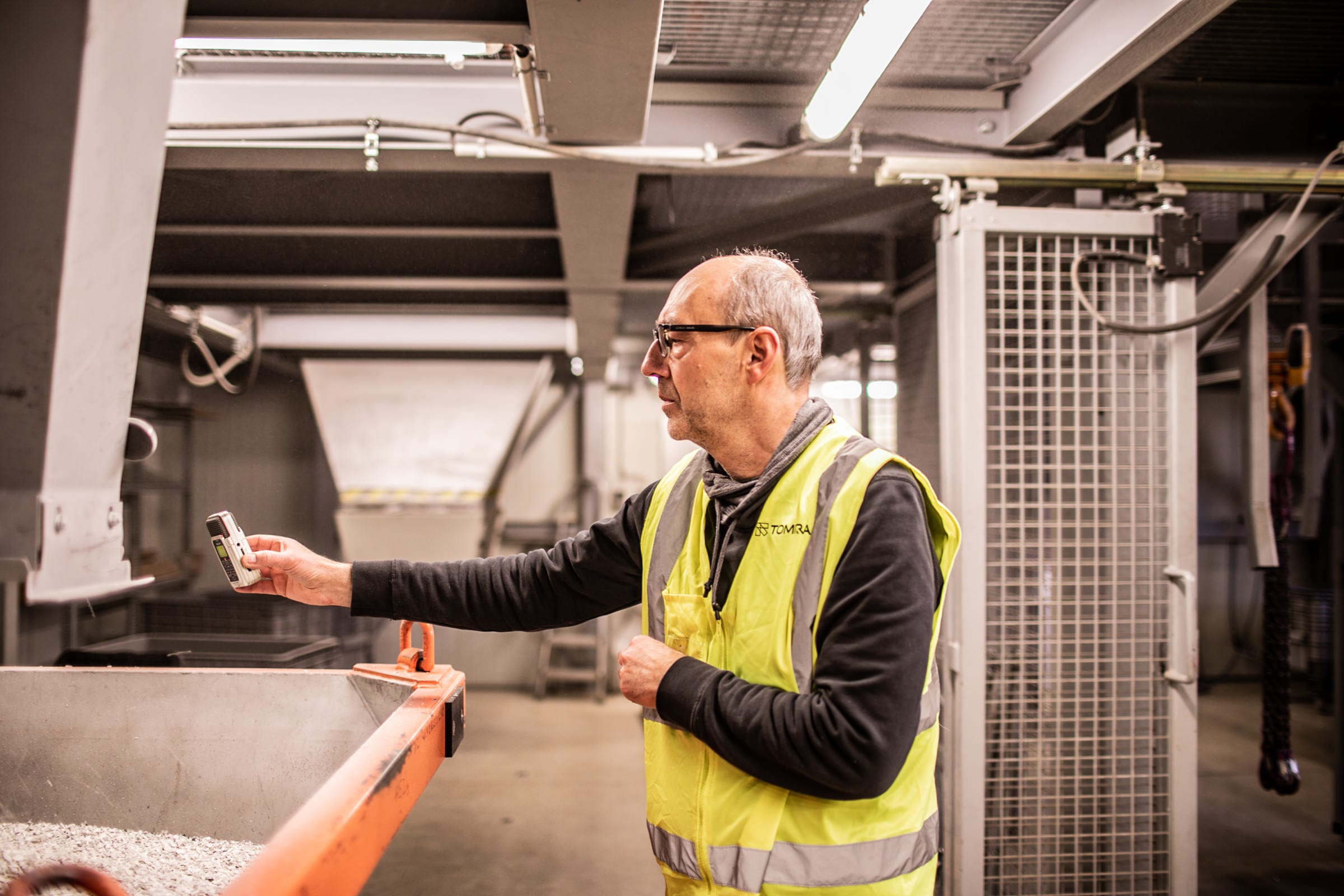 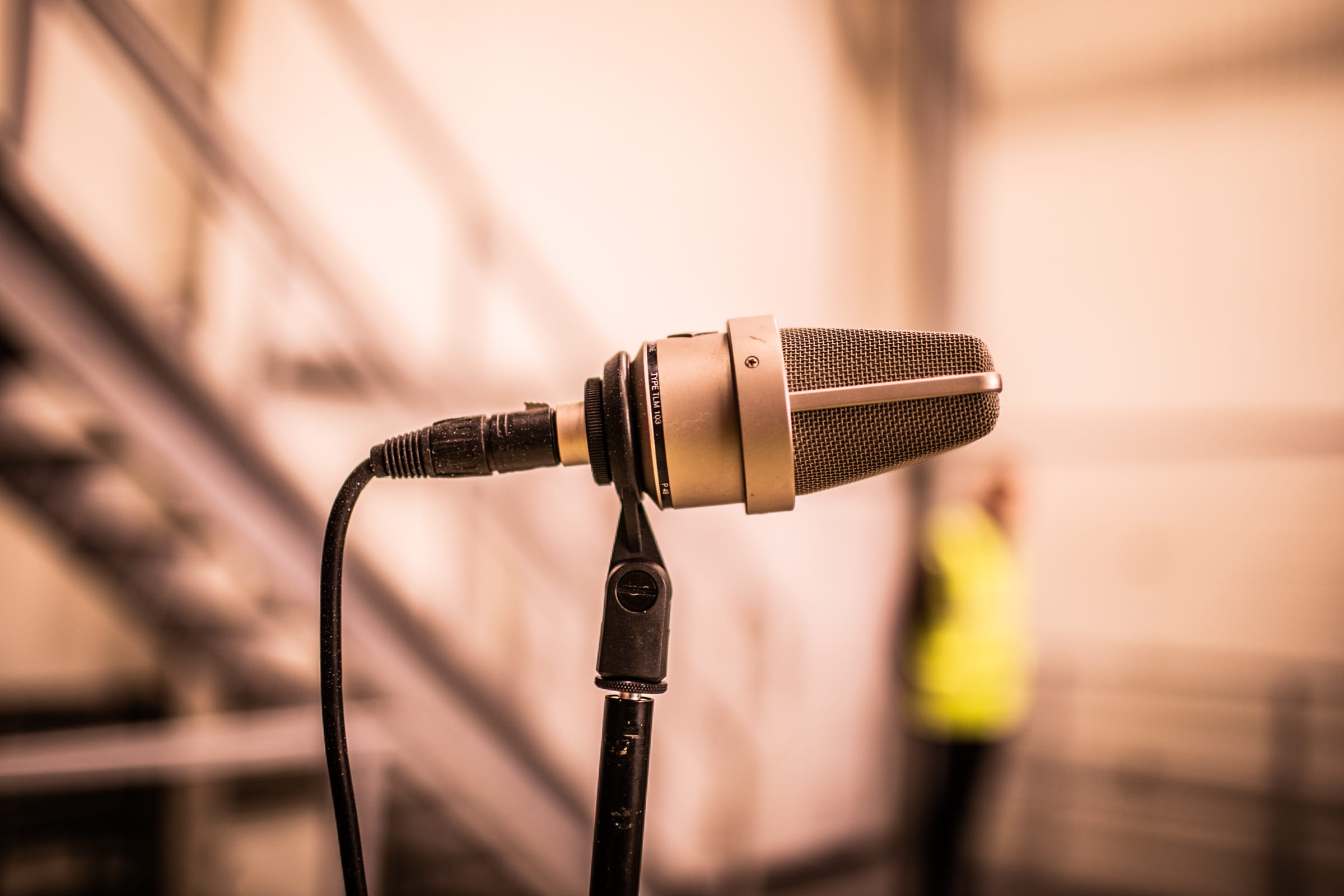 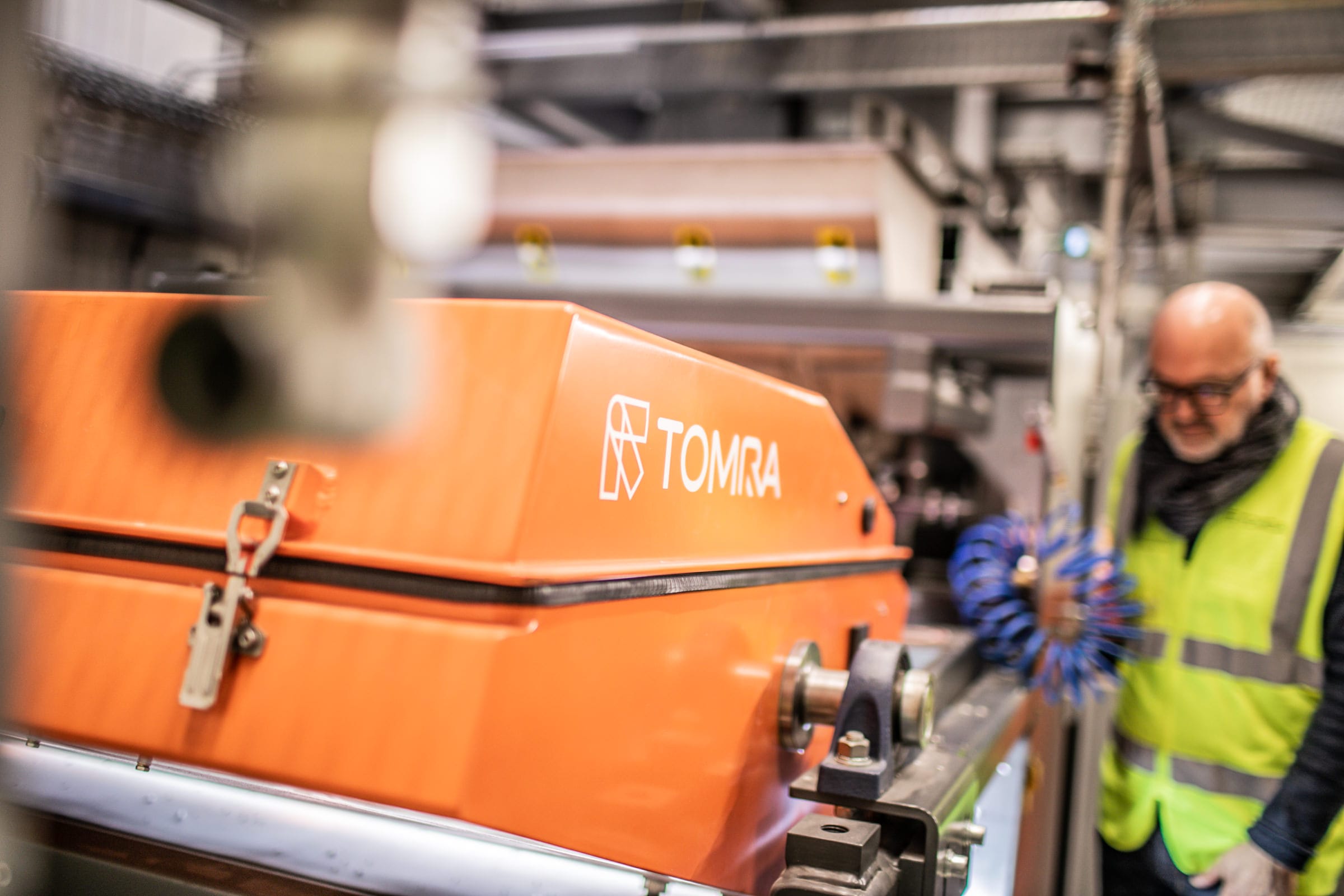 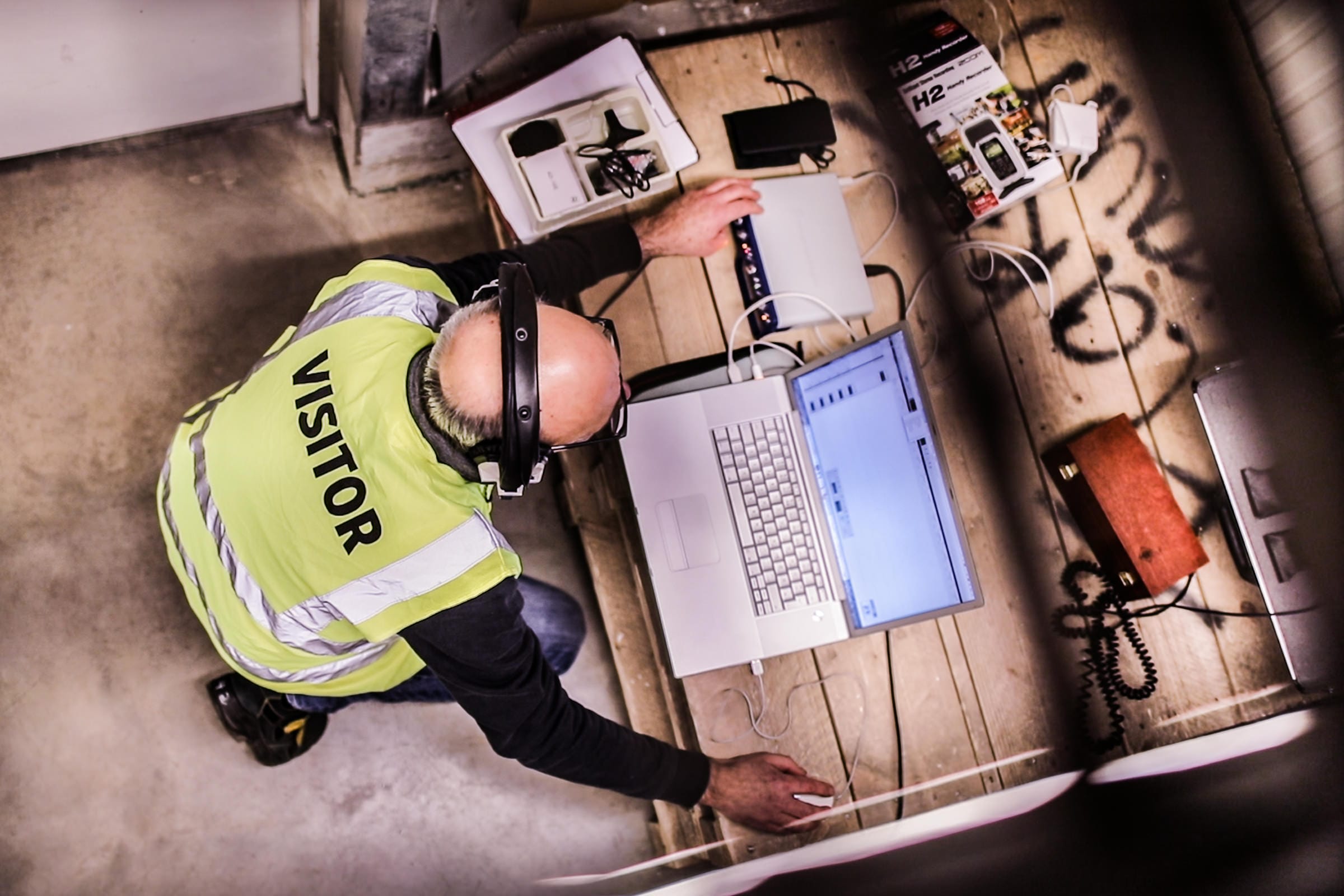 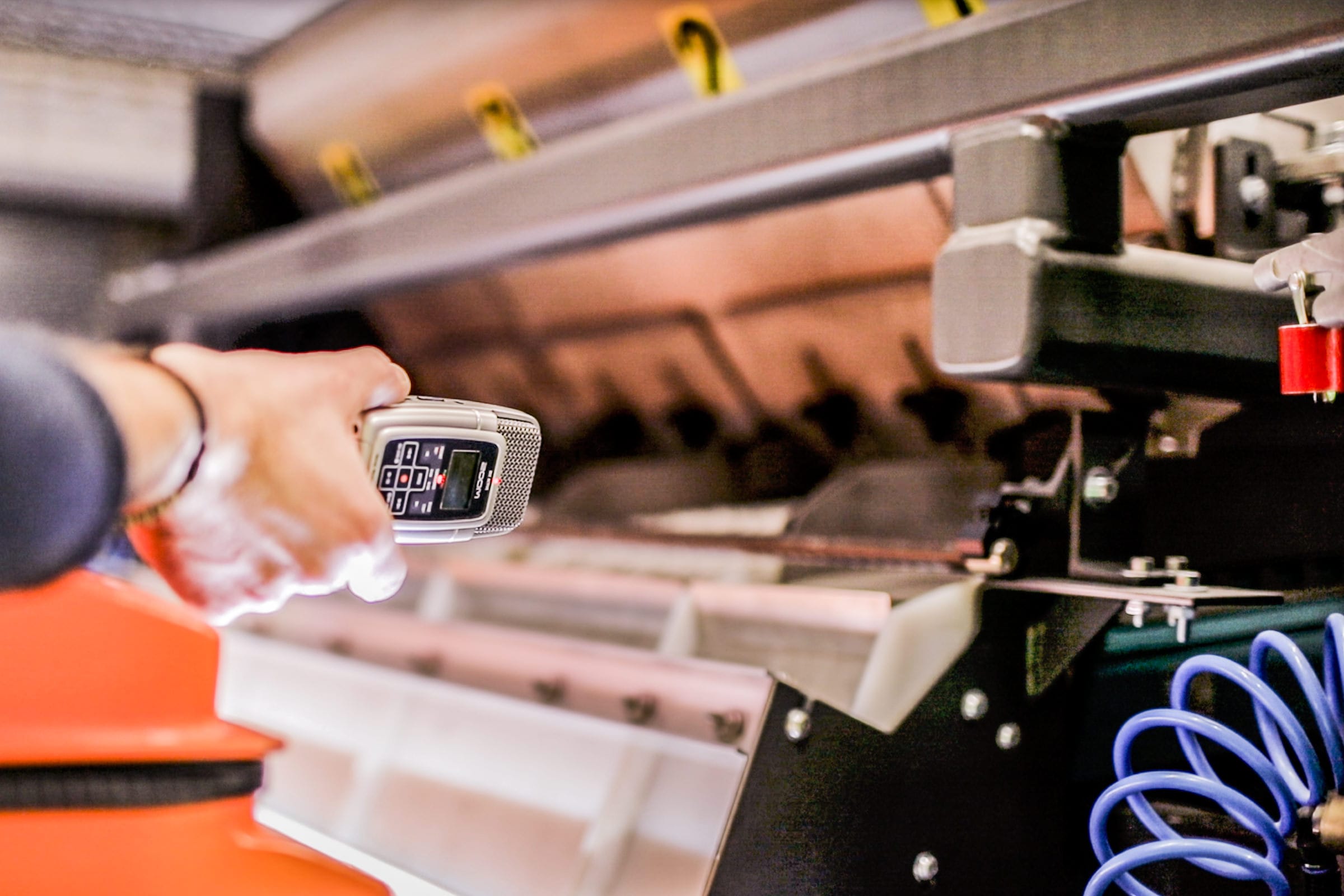 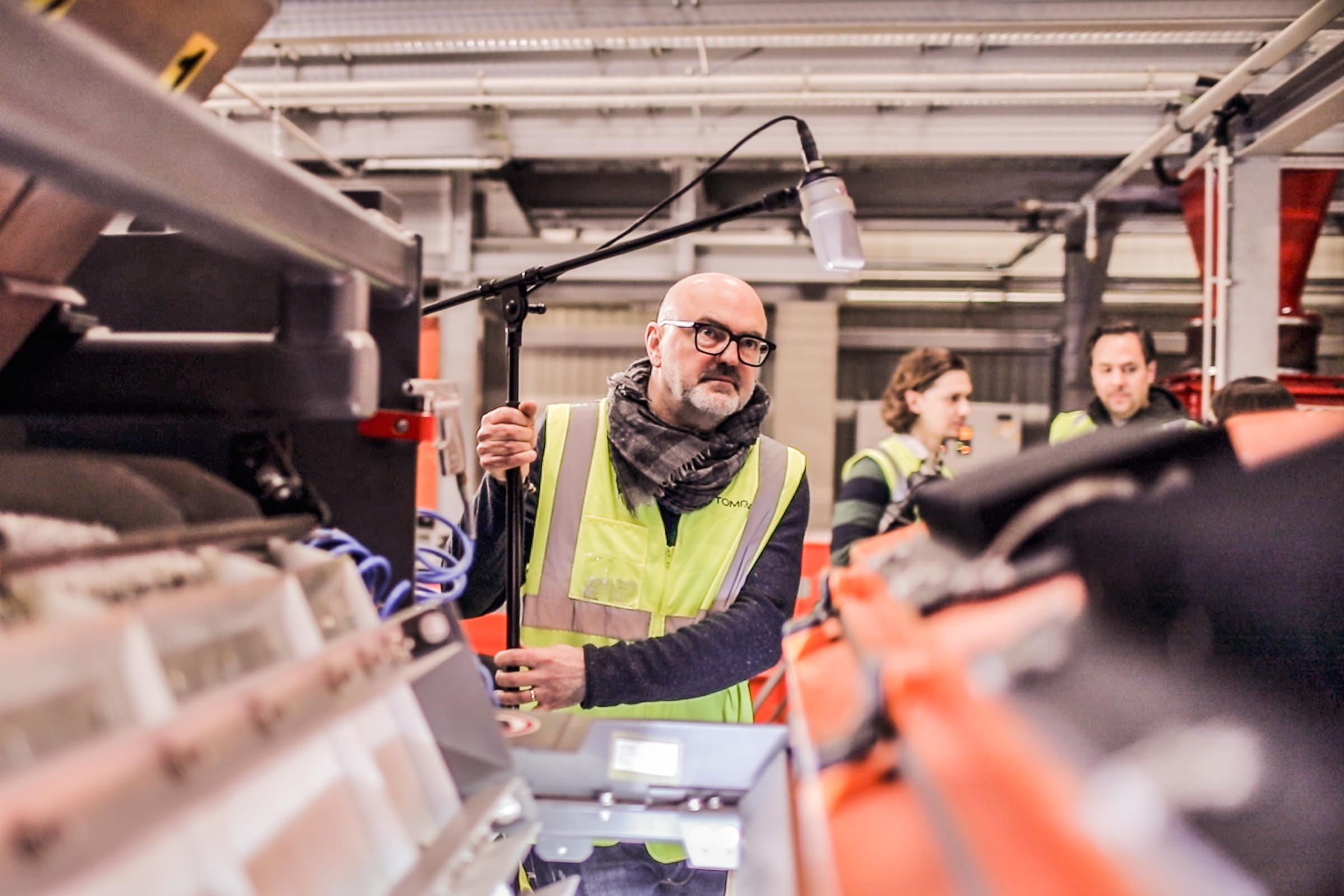 For use on other channels, the musical masterpiece needed moving images, too: 3D engineers transferred the emotionality of the vibrant sounds into video animation.

Metallic spheres move rhythmically in space, hovering waves of energy unite to from a pulsating circle, the symbol of a speaker. Exciting, energetic, innovative – this is how AUTOSORT presents itself, accompanied by cool beats. The unusal visualisation is perfectly suited as a distinctive feature for all communication activities.

The trade show was planned as a club event to match the sound video. We designed tickets for the invitation, merchandise such as T-shirts and tote bags and booked a DJ who would create a cool club atmosphere at the end of each day at the TOMRA booth: with electronic music, sampled from machine sounds. The entire team was working on the project… 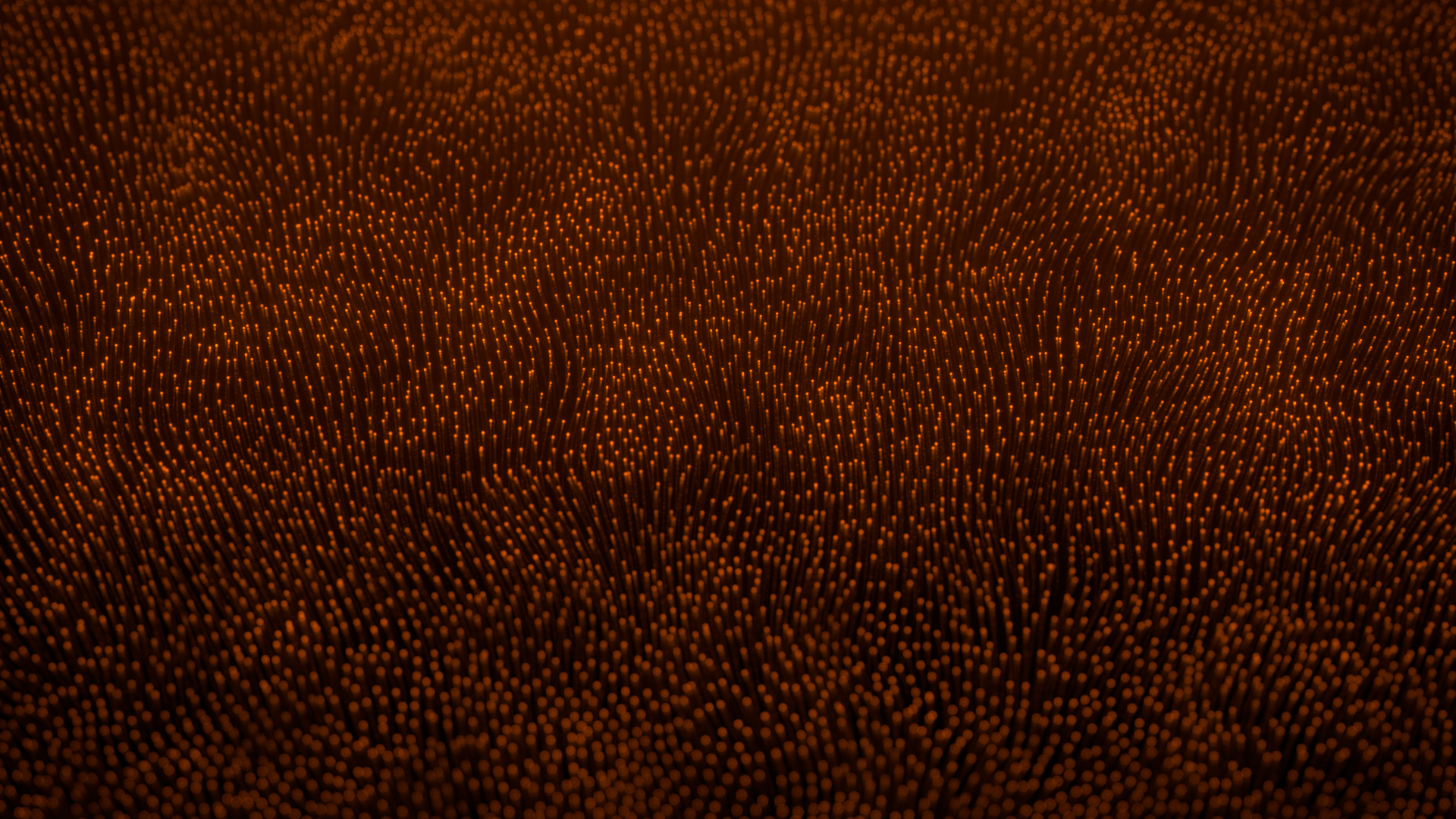 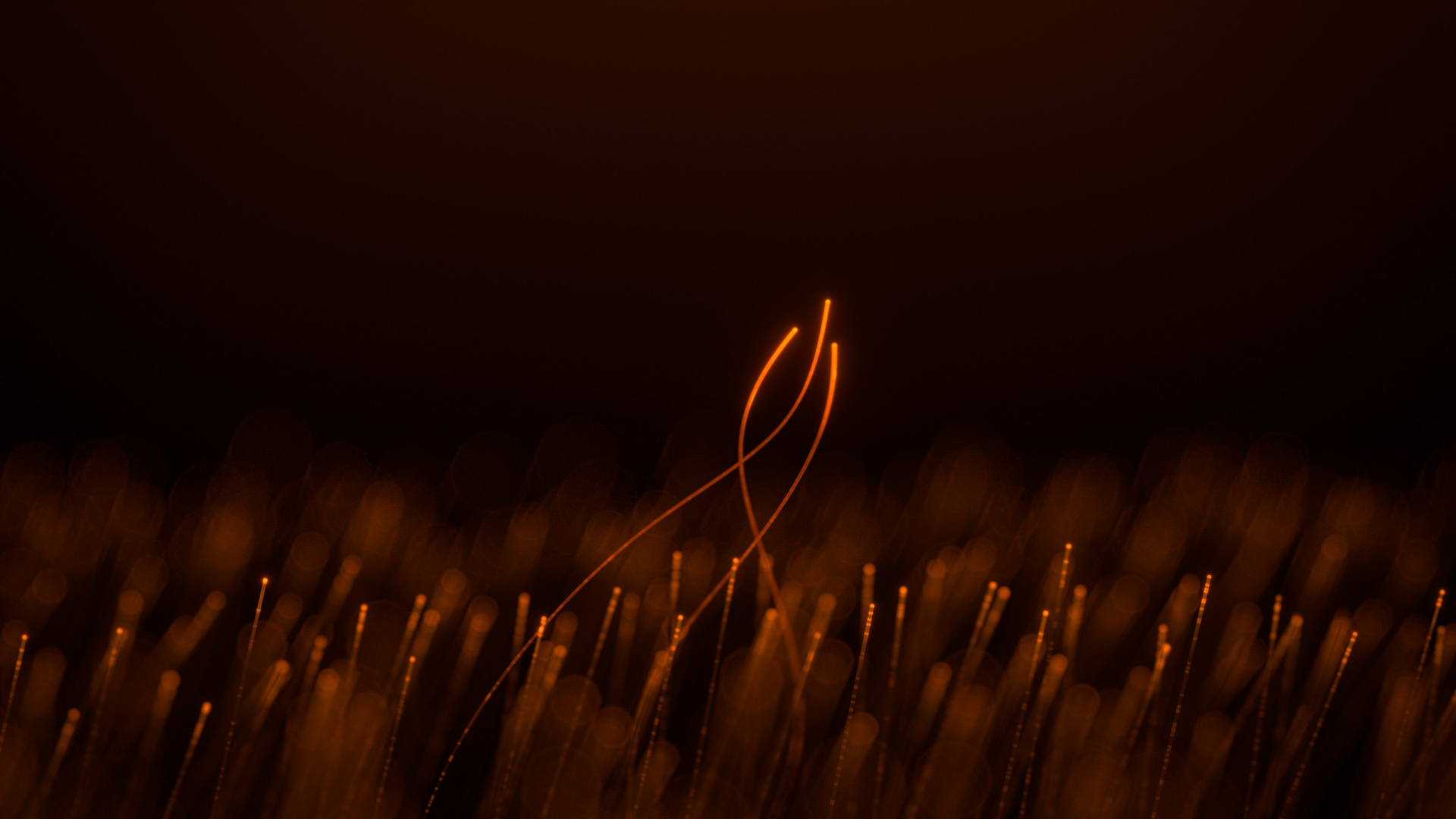 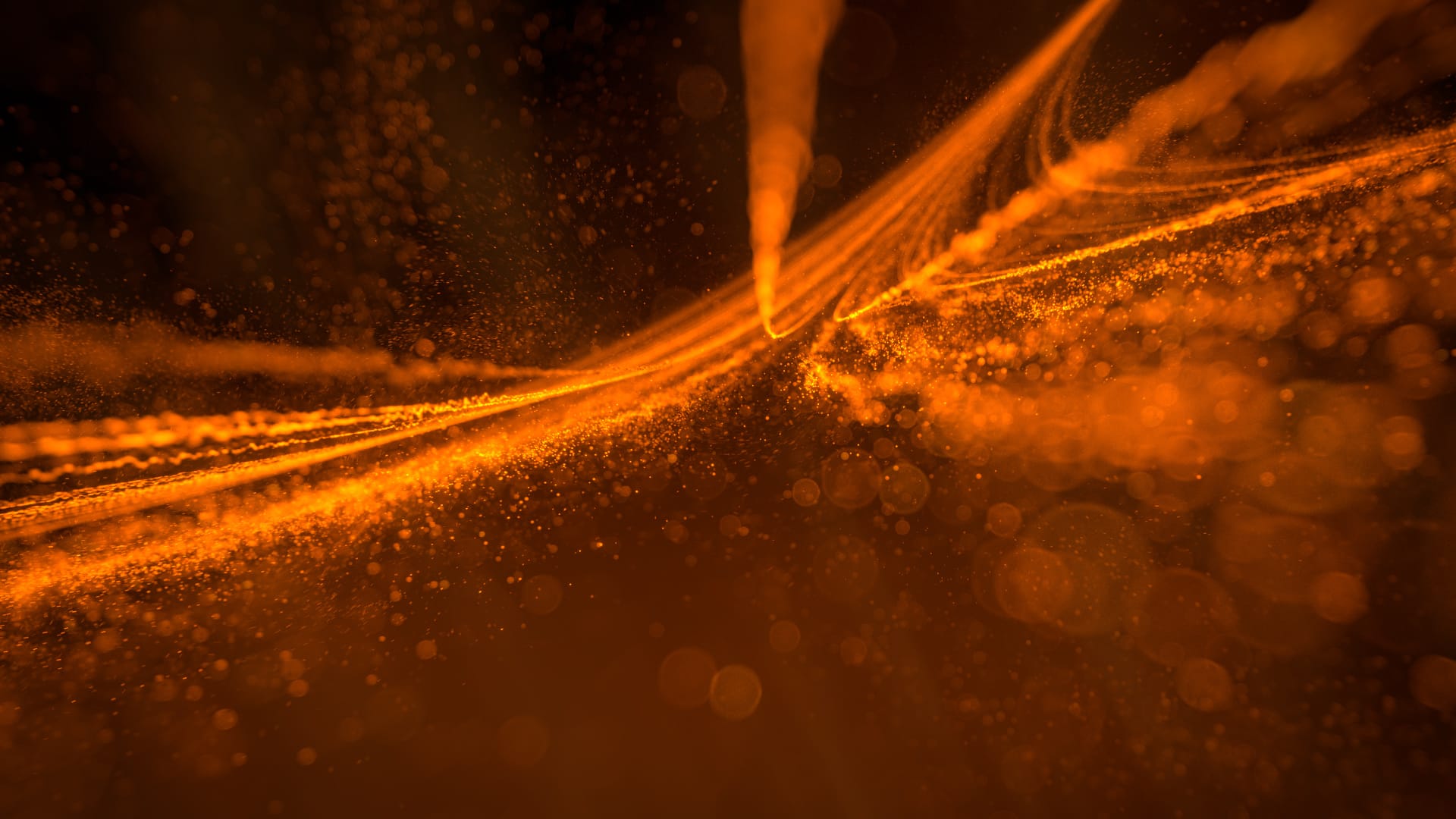 … and then came corona…

Three weeks before the planned event – it was actually Friday the 13th – the message of the lockdown hit us. No more large events, no trade shows, no club events. The hope for a replacement date also died soon after. We were literally cut of the power. 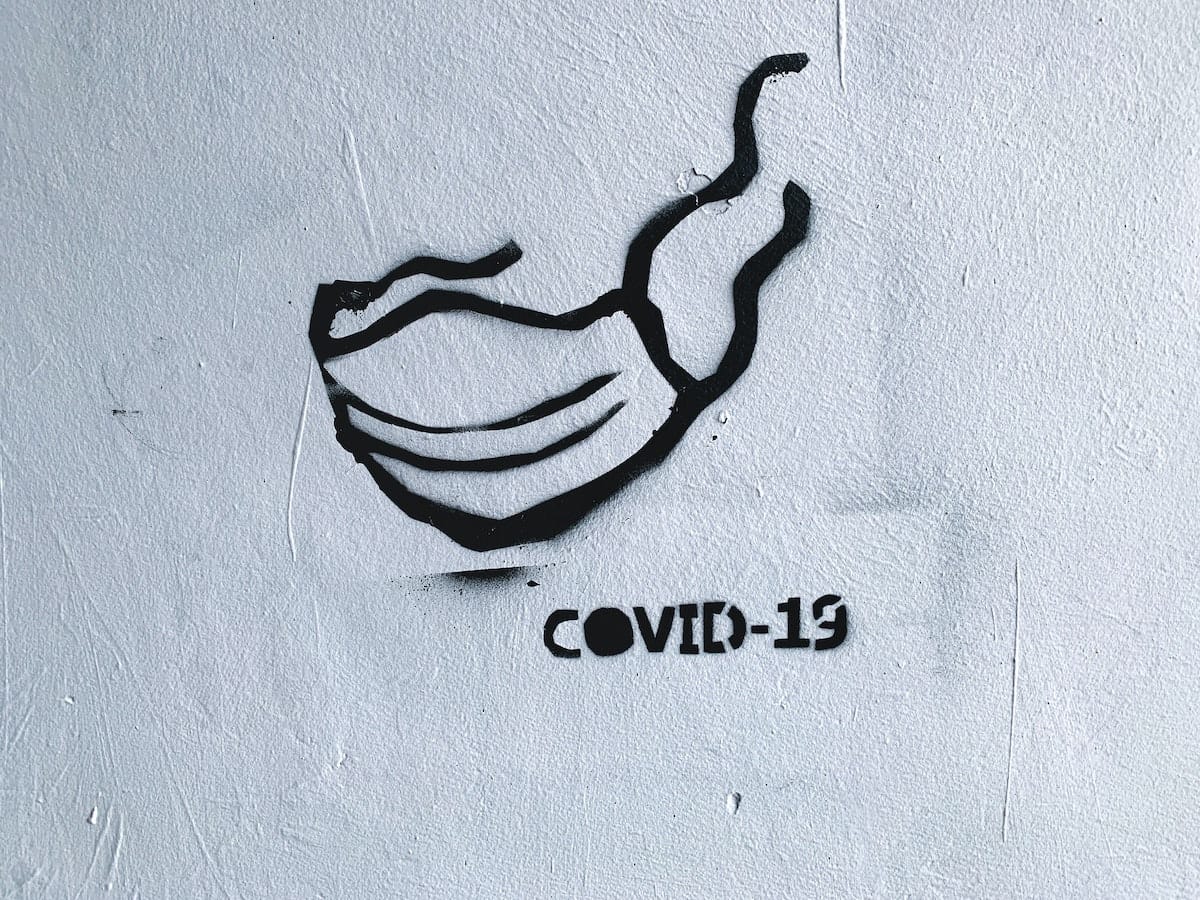 All garbage, or what?

But we would not be stopped: We decided to realise the event digitally. A first for TOMRA, and a challenge for our team. When a leader in technology like TOMRA decides to plan a digital event, it will be with maximum professionalism and precision in every detail.

But we remained confident – we had a powerful story. And a good, coherent story can be told in any medium.

The “Symphony of all Sorts” would electrify the audience in their remote offices just as well.

But the event had to be redesigned from scratch. What would the set look like, and the structure of the presentation? How would we manage to keep the tension over the entire event? How to integrate sales information and technical details? How to involve the audience? Because of to the travel ban, colleagues from Norway and Italy had to call in from their remote offices, enabled by smoothly operating technology.

The digital event was perfectly orchestrated. Stage set, directions, camera positions, light and sound technology, stage animations and live calls. The design and creative team along with the speakers made sure the “Symphony of all Sorts” was going to lead through the entire event like a baseline. 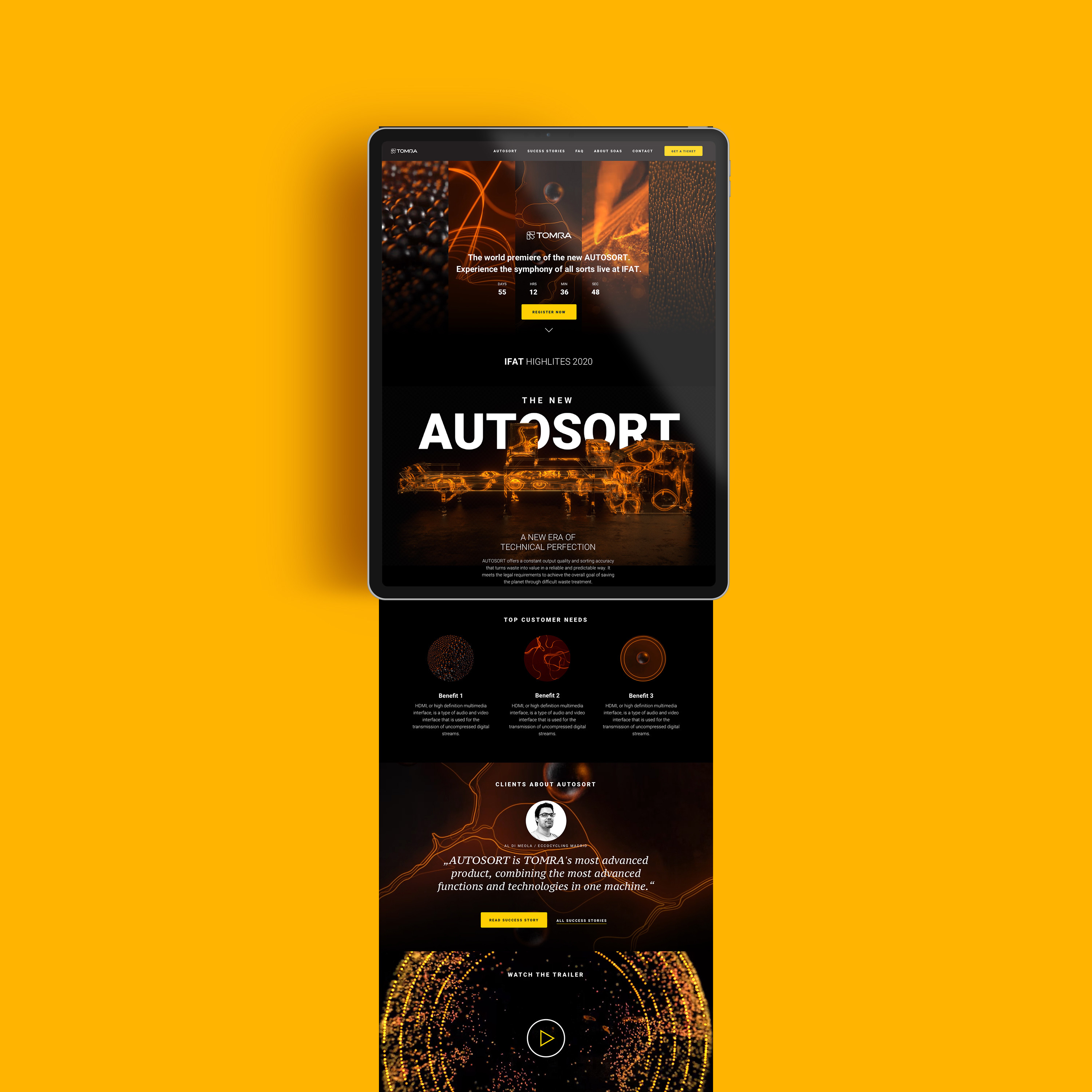 The 60 minute event consisted of two parts: An introduction with the virtual unveiling of the machine as its highlight, and a subsequent question and answer session for industry professionals and the press. The management was to present the story in an entertaining way, taking turns with live speakers on site in Mülheim-Kärlich and international representatives in their remote locations. Some features we pre-produced to make the event less error-prone. The fulminant animated video was the highlight of the show. It combined the emotional visualisation of the sound design with 3D views of the sorting machine. The second part involved the audience. Viewers could ask questions using a specially setup chat system on the AUTOSORT landing page. 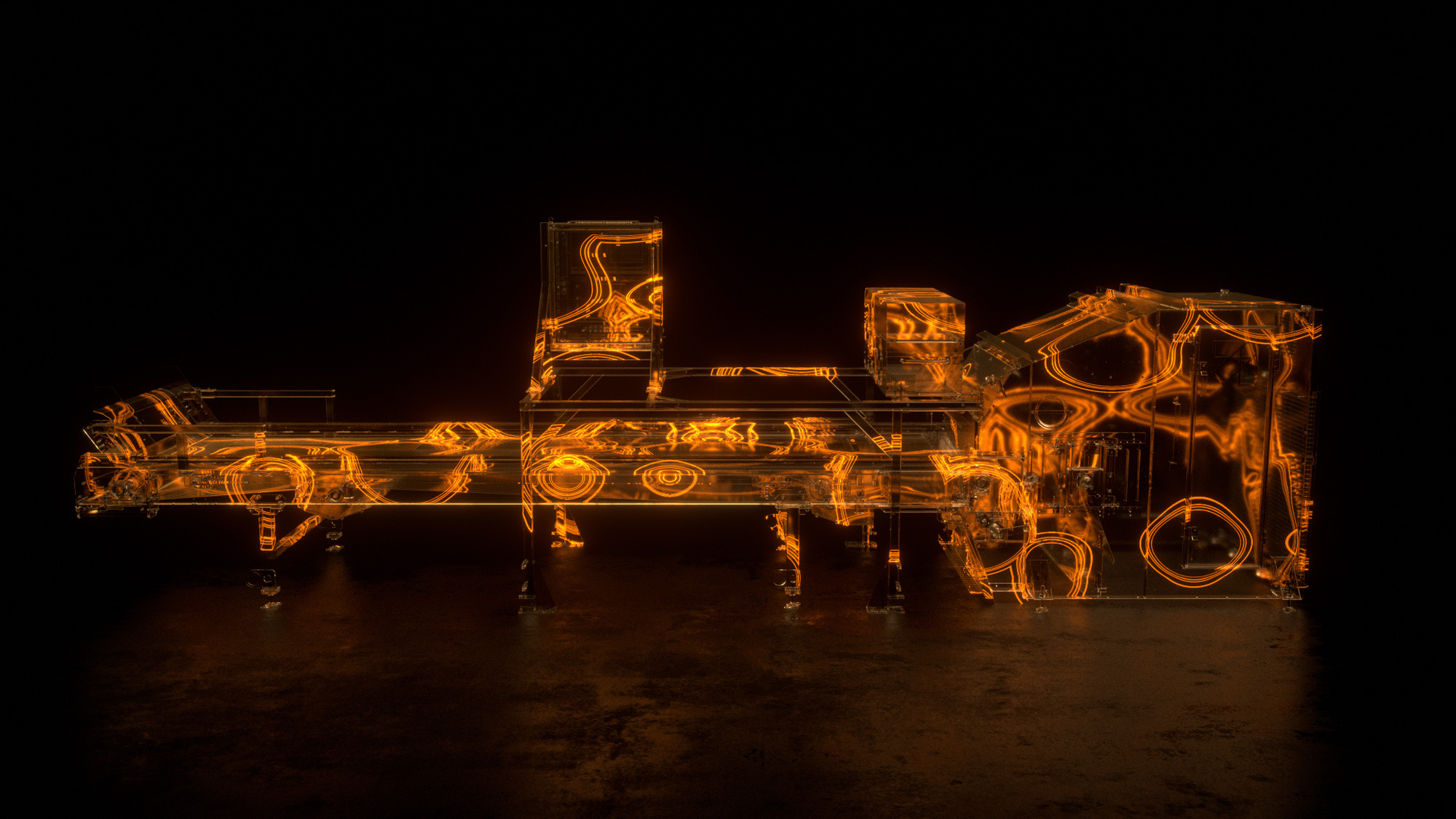 The most modern technical equipment for image, sound, light and of course streaming was used. The technical demands for a digital event are immense and can be as complex as for a live event.

Rehearse the case of emergency

An internal training event on April 5 and 6 that was also held digitally because of COVID-19 was to be the final rehearsal. We used the opportunity to check timing, sound, camera technology and lighting and, above all, to ensure the seamless transition between the various elements. 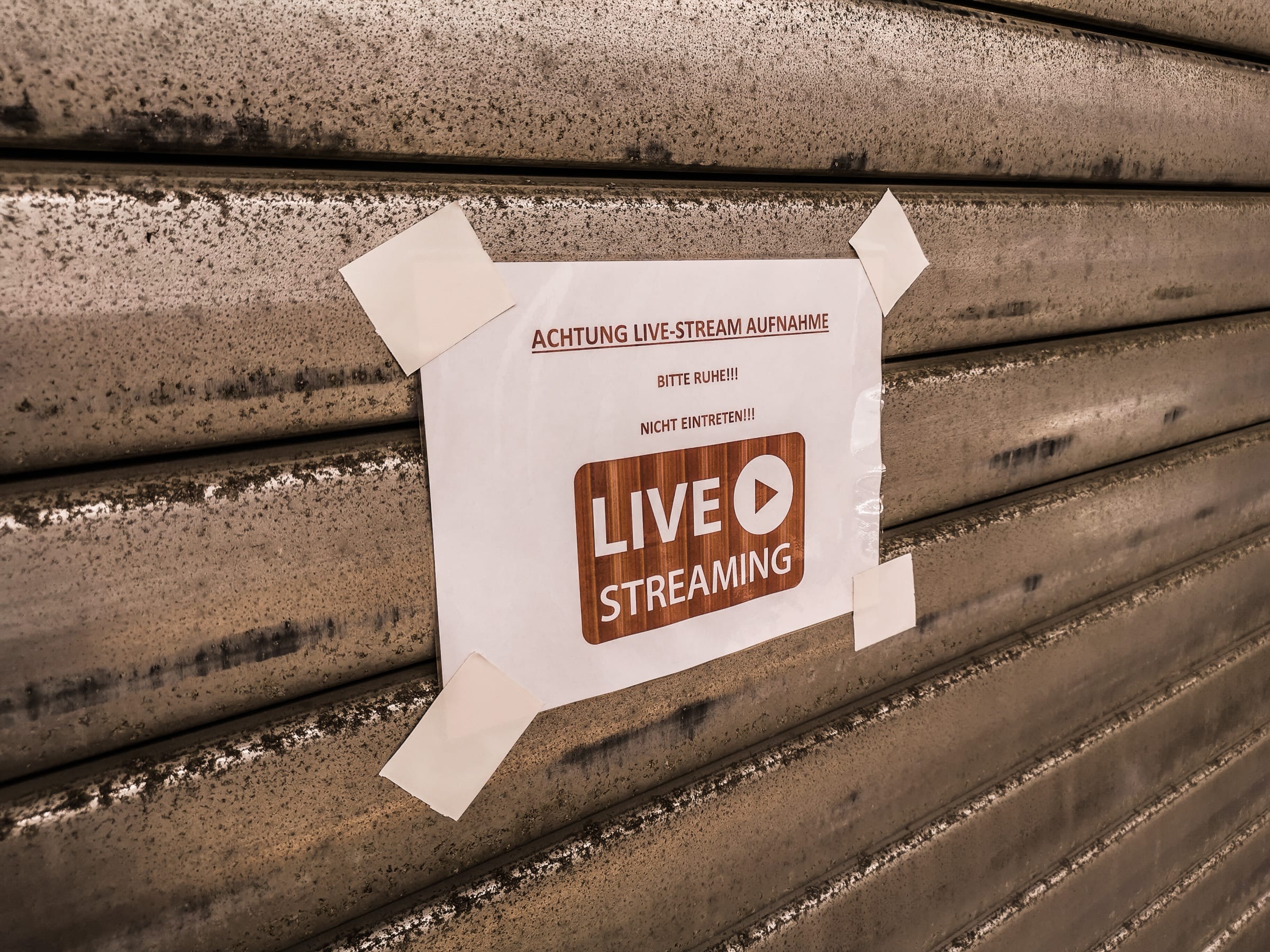 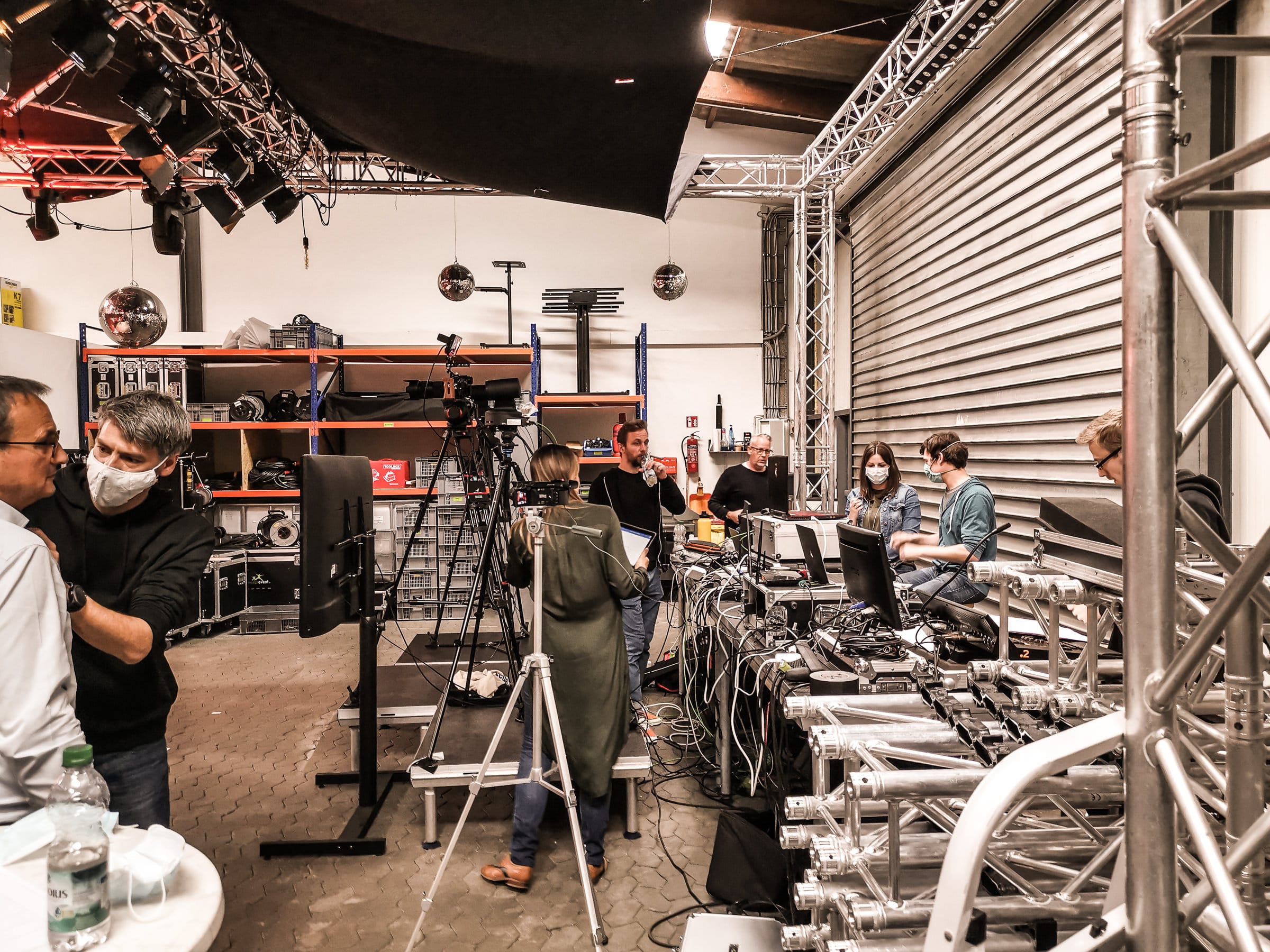 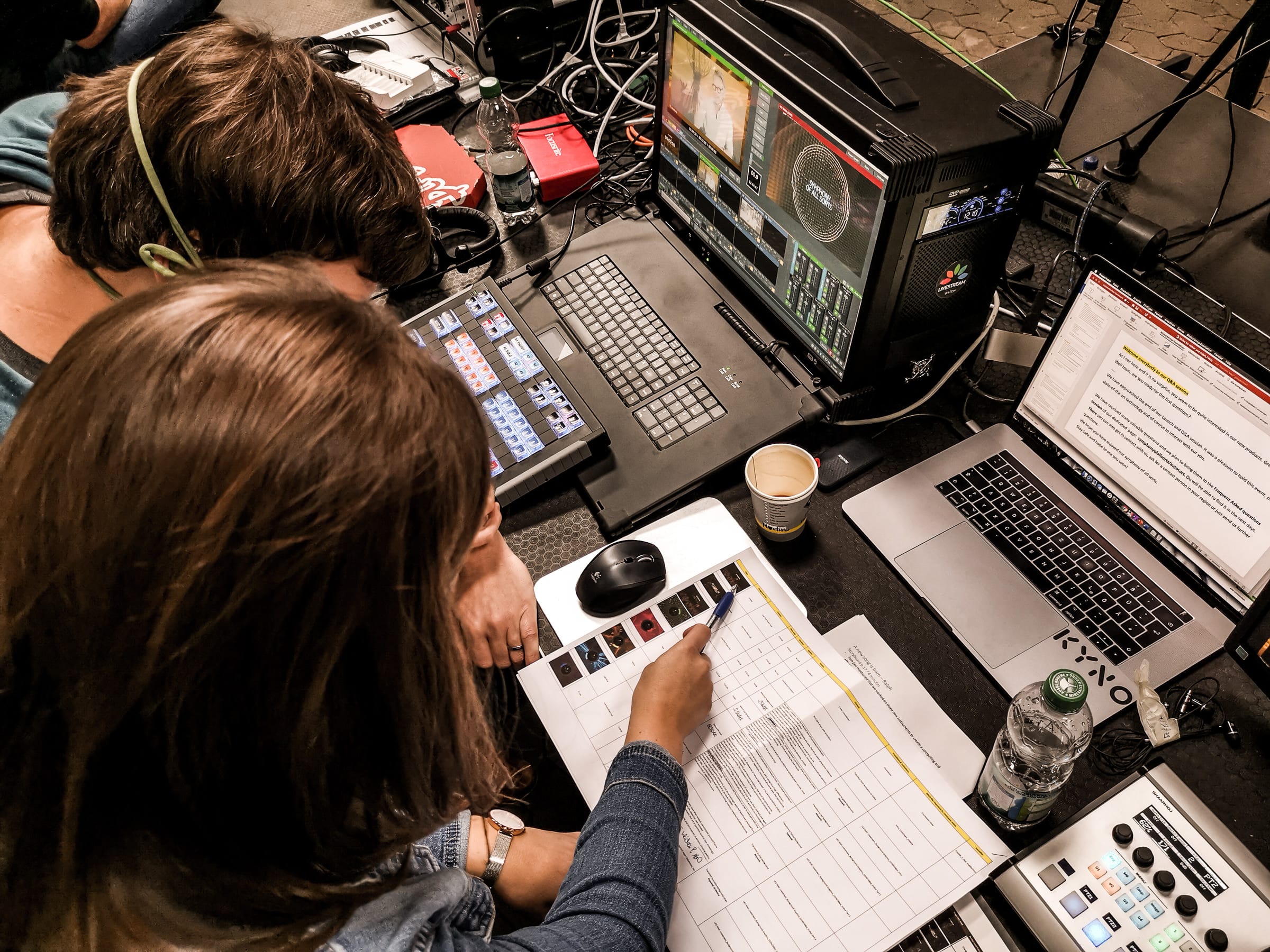 And slowly, the tension started to rise with the entire team: 1,300 viewers had registered with the registration link. One great plus of this type of event compared to a trade show: The audience’s attention is focused entirely on the event for an hour. On the downside: If something doesn’t go according to plan, everybody will notice.

Four people on stage, 25 people behind the cameras and on the controls. 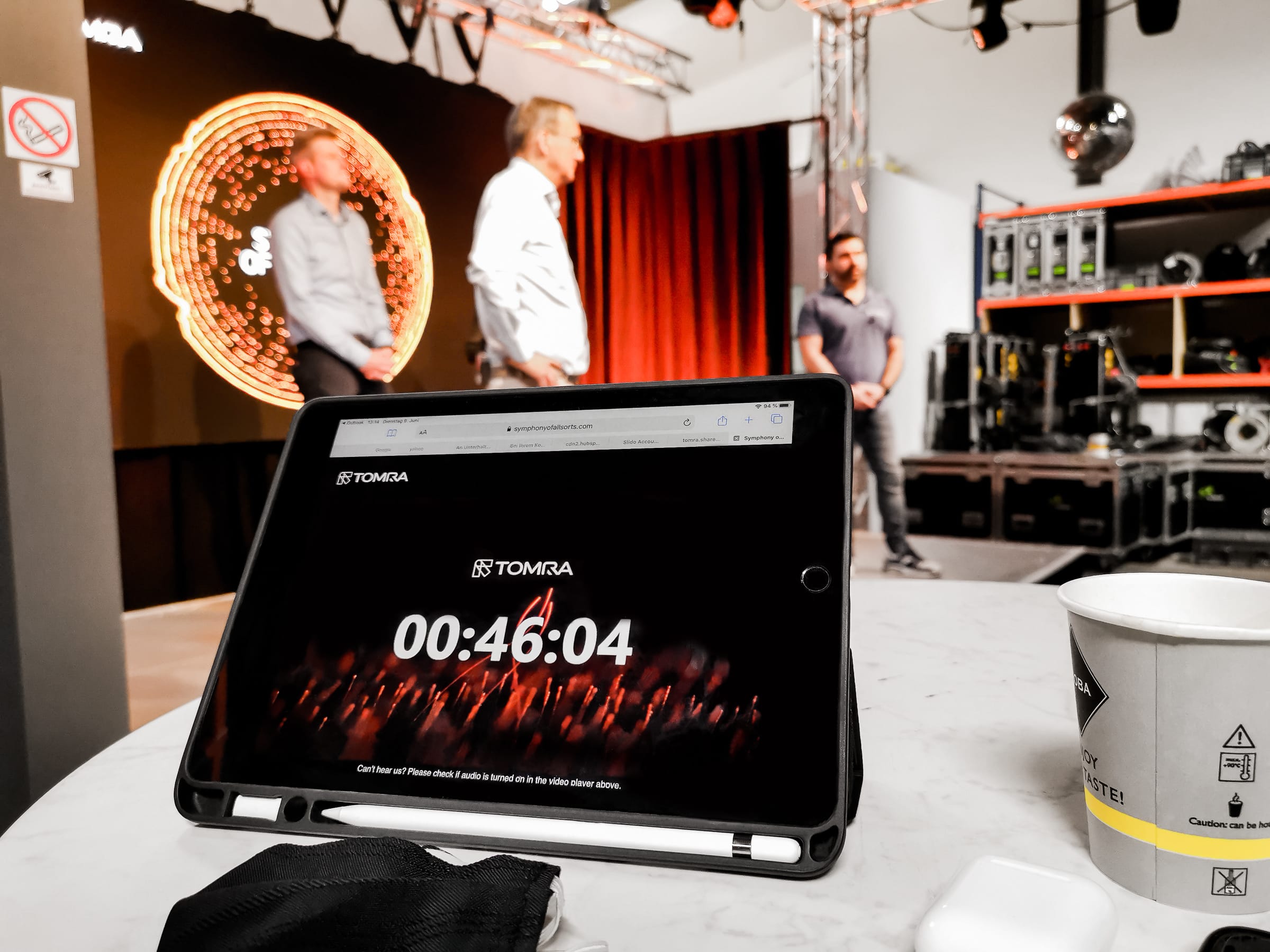 And then we’re live: 30 seconds of video animation and sound start building suspense. Volker Rehrmann, Head of Circular Economy, welcomes the audience and explains the reasons for the digital launch. He points out the importance of recycling and the role of TOMRA and AUTOSORT.

After a few minutes, he hands over to Tom Eng, SVP Sorting Solutions in Norway. He points out that the recycling industry only works when all parts play together, like the instruments of AUTOSORT. Back in the live studio, Ralph Uepping, Head of Technology, illustrates the development stages of AUTOSORT and explains the testing the machine had to undergo until the perfect symphony was created.

An finally, the highlight: The „Symphony of all Sorts“ is played.

A thrilling feeling. Then it’s off to Valerio Sama at headquarters, where the Head of Product Management demonstrates features and benefits of the machine. Fabricio Radice, Global Sales & Marketing Director, takes over and stresses that the machine with its new levels of purity in sorting and its efficiency was designed close to customers’ demands. Four regional sales directors address their virtual greetings to the audience.

Now on to part two: Question and Answer. Volker, Valerio, Ralph and the experts in their live streams answer viewers’ questions. The lively participation is proof that the presentation is well received. After about 20 minutes, the speakers say their goodbyes, a video symphony concludes the stream. The concert masters on the controls did a perfect job.

The presentation was a great success. More than 1,000 viewers followed the event on their screens, among them international press representatives. The feedback from the industry was overwhelming, and the press reviewed the story of the „Symphony of all Sorts“ enthusiastically. TOMRA is convinced: This was not the last digital event. And yes, there will be trade shows again at some stage, but digital events offer great opportunities for exciting productions. It just takes some courage and determination – and a good story. 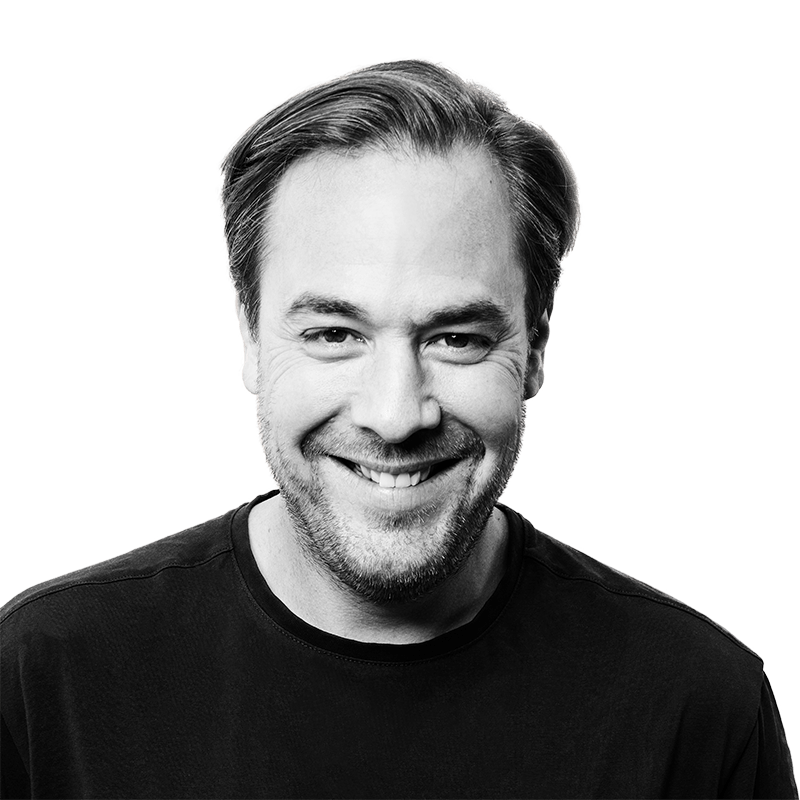 If you would like more information, a personal appointment or a workshop on the subject, please contact me.

From product supplier to opinion leader

Good packaging is half the battle

Is this art or is it rubbish?